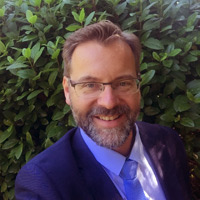 The President- Founder of International Impact, Jean Christophe CRESPEL, is a 47-year-old social entrepreneur married with 5 children. He has dedicated his life and his career to the commitment of solidarity and especially humanitarian and volunteer projects both in France as well as internationally.

From 1996 to 2005, he spend the first 10 years of his career in business within GEODIS, the first French logistical organization, during which he developed technical and managerial skills and his commitment to solidarity. While at GEODIS, he urged the CEO to create a corporate foundation.

In 2001, he created Nomades On Line, one of the first world humanitarian tour, co-financed by the French Ministry of Foreign and European Affairs, the Institut Pasteur, Le Routard, etc.

Then in 2003, he founded ECUASOL – a Franco- Ecuadorian NGO dedicated to the underprivileged children of a shantytown north of Quito in this Latin American country. Since then, ECUASOL has worked all over the country to prevent children and communities from the risks of natural disasters (such as earthquakes, volcanoes, tsunamis, floods).

In 2005, he was appointed as the Director of Logistics of ACTION AGAINST HUNGER (put in French). The organization is putting in place an emergency response device that was used for the 2010 Haiti earthquake and Haiyan cyclone in the Philippines.

The synergies created with the United Nations and the Anglo-Saxan NGOs namely, OXFAM, CARE, and WORLD VISION, among others, prompted him in 2007 to co-found, with the support of a US donor, the HUMANITARIAN LOGISTICS ASSOCIATION (HLA). Today the HLA is a global network of humanitarian logistics specialists with 3000 members.

From 2007 to 2017, Jean Christophe joined the EUROPEAN RAID GUILD as Director of Development. The GUILD works primarily to develop an information system of deploying international volunteering, and has successfully done so for more than 1200 volunteers managed per year in 2017. He has established the International Service Civique, and the voluntary service of the European Union. In 2009, he co-founded FRANCE VOLUNTEERS, based on a structure created by General de Gaulle and was on its board of directors. He also joined the Strategic Committee of the CIVIC SERVICE AGENCY.

Since 2010, he has also been a consultant for organizations, foundations, local authorities, and companies, such as, Reed Exhibitions, SITL, Regional Council of Burgundy, Regional Council of Yvelines, Cojean, Fritz Institute, Salon des Solidarités, Fondation Mérieux, etc.

A graduate of EDHEC, a Master of quality in SUP de CO and CENTRALE Lille, Jean Christophe has completed an officer training in SAINT CYR. In 2017 he completed his training in NGO administration at HARVARD BUSINESS SCHOOL.