Blandine, civic service for 8 months in Cambodia, at the René Descartes High School in Phnom Penh 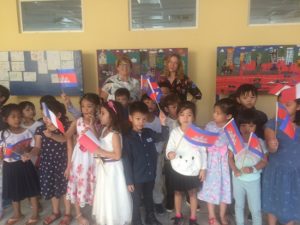 1° What is your opinion of the inhabitants and the region where you were located?

During these 8 months of civic service I was able to observe that there were several Cambodia, let us say at least two, the one in the capital where my mission was taking place and the one in the countryside. Phnom Penh is a rapidly developing city, but behind the shopping malls and overcrowded roads there are several friendly neighbourhoods, where you can interact with the people and get a real insight into the cultural richness that this country has to offer. The Khmers can sometimes seem a little cold towards foreigners, the recipe for breaking the ice is to learn a few words, (and even better!) a few sentences in their language.

2° Was the working environment as you imagined it?

Yes, working in a French high school abroad offers a very good professional environment for the implementation of new projects. In addition, the professionals of the establishment who are used to seeing the teams regularly renewed are very welcoming, open their doors easily to you and are generally open to new proposals concerning the implementation of workshops, activities and educational support.

3° Could you describe some of the recurring activities in which you participated at René Descartes High School?

I was involved in several classes, especially in CP but also in CE1, around the theme of reading. These were workshops to learn to read, understand texts and discover new vocabulary words. These workshops were valuable in a school context where cultural diversity was a must. Indeed, it is not uncommon for children to come from mixed families where French is not necessarily the language spoken at home.

In the same way, I also worked in BCD [Library Documentation Centre] to support activities related to storytelling and the organisation of educational workshops, for example around the “Little Red Riding Hood”.

Finally, I was also able to lead various workshops during the cultural events organized by the institution (e.g. arts weeks).

4° How did the children behave with you, did they react to cultural differences?

The connection with the children came naturally. They are used to evolving from an early age in a context of interculturality and therefore generally have no problem with cultural difference.
It is sometimes a little more difficult with children in kindergarten because French is very new for some of them, but it is always possible to communicate and be understood.

5° Have you adapted well to the living conditions in Cambodia (temperature, language,…)?

After the first few weeks, the time to get used to the jet lag, the temperature and the noisy animation of the streets, Cambodia shows its way of life, which persists despite the visible effects of globalization and its cultural richness: meeting, language, food, temple, landscape quickly make you forget the rest. 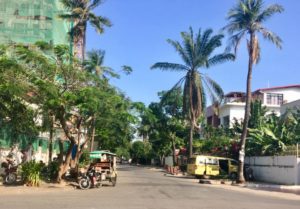 6° Could you share with us what this mission has brought you, in a few words?

Professionally, as a young graduate in psychology specialising in children and adolescents, she allowed me to remain in contact with this population and to see it evolve in different contexts (class, bridge system: psychologist and educator, BCD workshop). I was also able to learn to work with different professionals, which was very rewarding. This experience also allowed me to train myself by following, for example, a training course in the school on interculturality and another on living well together.

7° Do you have the desire to return to Cambodia? If so, to carry out other humanitarian missions there?

Yes absolutely, currently on a doctoral contract, I would like to make my free time available to go on humanitarian missions, and why not in Cambodia!

8° Do you have any fundamental advice for others who would like to engage on a similar adventure?

I think it is essential before going to work in a new country to find out about the country’s customs and traditions, but also about its history, such as politics, and the laws in force in the country.
For Cambodia, it is good to avoid driving scooters, at least in the capital and major cities.

It is important to speak a little Khmer if you want to have a more friendly exchange with Cambodians.

And don’t hesitate to leave Phnom Penh on weekends, because Cambodia has many little wonders to offer. 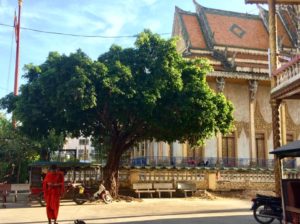